After postponing the Jog-a-ton from a Friday to a Monday, many students stepped up and ran as much as they could. Many didn’t just run during the Jog-a-ton, but many also ran around to loved ones to fill pledge forms to receive funds for how many laps they completed, or only a fixed amount for participating in the Jog-a-ton. Many parents had fun cheering on the children as they lapped them many dressed with capes and pretending to fly. Fun was had by

children, but more importantly than the fun they were having is the underlying reason why the Jog-a-ton was held. This was a fundraiser to have money to pay for a new playground structure to replace the one that was broken and removed the 2015-2016 school year. 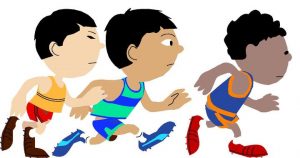